In a few weeks, we are presenting in Christchurch, New Zealand, a brief paper [1] on the impact of fire in wind turbines.


The wind energy is one of today’s leading industries in the renewable energy sector, providing an affordable and sustainable energy solution. However, the wind industry faces a number of challenges, one of which is fire and that can cast a shadow on its green credentials. 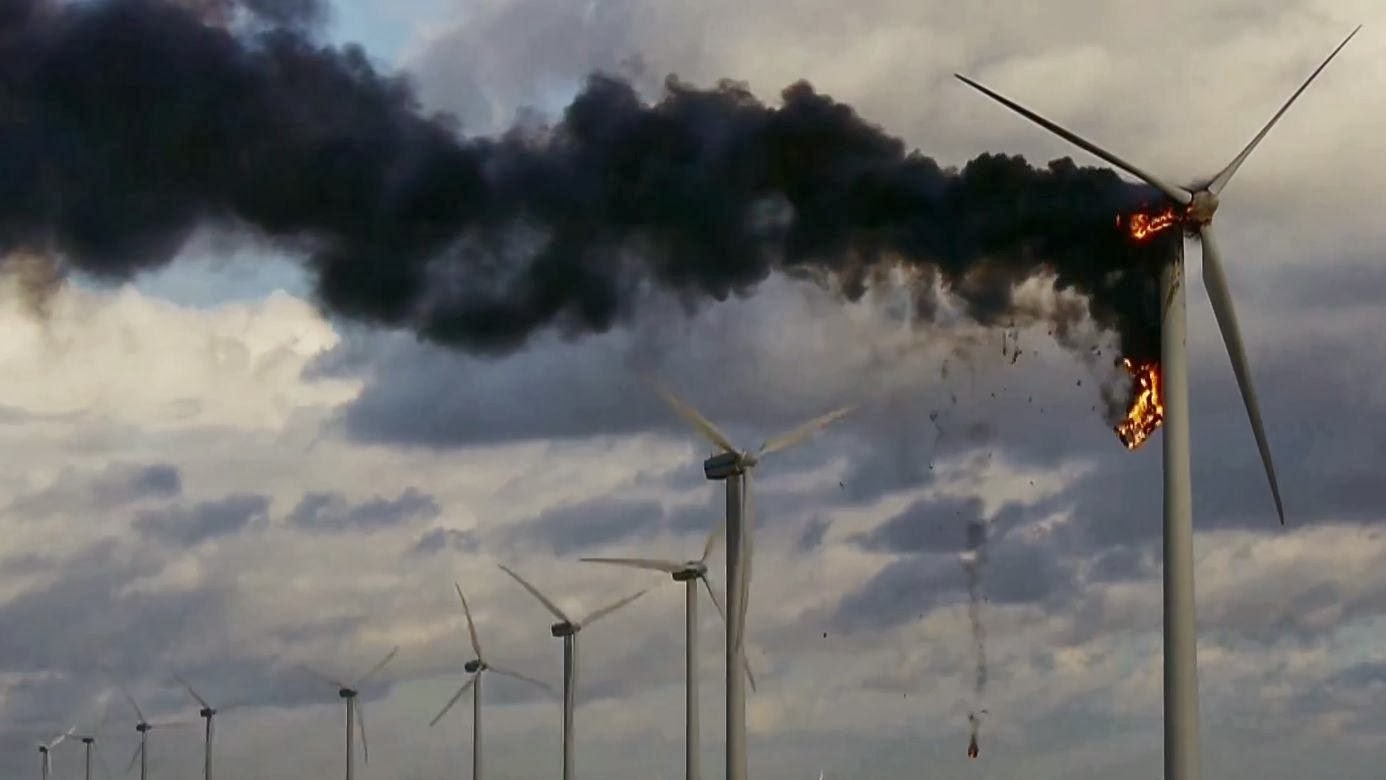 We have found that fire is the second leading cause of catastrophic accidents in wind turbines (after blade failure) and accounts for 10 to 30% of the reported turbine accidents of any year since 1980’s (18/7/2014 Update: "since 1990's").

[March 2014 Update: The video of the talk, presented by co-authored Dr Carvel, can be watched here:]


The total number of turbine accidents recorded in the period 1995-2012 was 1328. The most common cause of accidents in wind turbines is blade failure with 251 registered instances (19%). It is closely followed by fire with a total of 200 incidents recorded, which is 15% of all the reported accidents. This represents on average 11.7 fires per year (~one fire accident per month). This figure of turbine fires per year may not seem a great number compared to the fact that there were ~200,000 wind turbines worldwide in 2011. However, due to the excessive financial loss that a fire can cause, especially in a small wind farm, it is an issue that owners and insurers are keen to address. But we argue that this is only the publicly available tip of the iceberg representing about 10% of the total number of fires. A rough average estimate of the real figure is 117 fire accidents per year (ten times the figures reported publicly).


[18/7/2014 Update: Our 10-times extrapolation that we apply in the paper is based on the assumption of uniform failure rates for all failure types (blades, fire, structure, etc). This assumption is not a strong one and would need to be double check with higher quality data. Among all the conclusions of our paper, I feel that the 10-times higher number of fire accidents is not the most important or stronger one. We could have emphasized this weakness.
Once more, I would like to defend the robust fire safety record of the wind industry worldwide, because a frequency of 1 fire per 10,000 turbines that our paper reports makes wind one of the safest energy source].


Instances of reports about fires in wind farms are increasing, yet the true extent of the impact of fires on the energy industry on a global scale is impossible to assess at the moment. Sources of information are incomplete, biased, or contain non-publically available data. The poor statistical records of wind turbine fires are a main cause of concern and hinder any research effort in this field. This paper aims to summarise the current state of knowledge in this area by presenting a review of the few sources which are available, in order to quantify and understand the fire problem in wind energy.


The three elements of the fire triangle, fuel (oil and polymers), oxygen (wind) and ignition (electric, mechanical and lighting) are represent and confined to the small and closed compartment of the turbine nacelle. Moreover, once ignition occurs in a turbine, the chances of externally fighting the fire are very slim due to the height of the nacelle and the often remote location of the wind farm.

The main causes of fire ignition in wind turbines are (in decreasing order of importance): lighting strike, electrical malfunction, mechanical malfunction, and maintenance. Due to the many flammable materials used in a wind turbine (eg. fiberglass reinforced polymers, foam insulation, cables) and the large oil storage used for lubrication of mechanical components, the fuel load in a turbine nacelle is commonly very large. Our paper [1] finishes with an overview of the passive and active protection options and the economics (costs, revenue and insurance) of wind turbines to put in context the value of a loss turbine compared to the cost and options of fire protection.

We hope that this paper will encourage the scientific community to pursue a proper understanding of the problem and its scale, allowing the development of the most appropriate fire protection engineering solutions.