Engineering can be the most creative profession, but we engineers are in general not the best communicators nor the best at appreciating arts. These are not really topics of interest in Engineering Schools around the world.
Sir John O'Reilly said it better during the 2014 Mountbatten Lecture at the Royal Institution, "Engineers should embrace the arts as being key to creativity and an important component of innovation, crucial to creating new products and boosting future competitiveness". Sir John is also proposing to change STEM to STEAM (science, technology, engineering, arts and maths) and he has my support.

I always want to build on this and encourage somehow my students' motivation on communications and the arts. So this year, again, I started the academic year with Creative Contests for each my courses at Imperial College: ME2 Heat Transfer and ME4 Combustion. The instructions to participate were the following: "I have three extra copies of the textbook to give away. If interested, send me a poem, comic, drawing, painting, song, video, or anything creative that explains why you are taking this course. Art, wit and humour are allowed, even encouraged". I show below the submissions; congratulations to the winners (I wish an extensive use your new awarded textbooks).

I was the sole jury and found three winners (the first three shown here), each received a hard copy of Incropera's Foundations of Heat Transfer. These are the submissions: 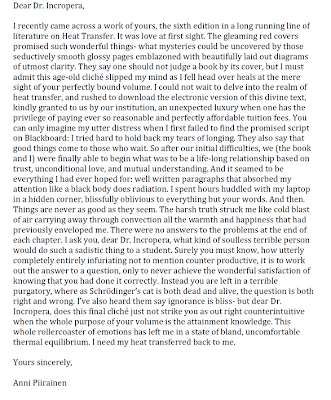 2014 Candle's Creative Contest in ME4 Combustion

I asked the class to be the jury via a Memtimeter survey and they found three winners (the first three shown here), who got a hardcopy of McAllister's Fundamentals of Combustion Processes. The three runners up (following three submission) got a copy of Faraday's Chemical History of a Candle. These are the submissions: