During 2015, Hazelab grew with two new PhD students who joined the Department of Mechanical Engineering, Yuqi Hu and Franz Richter.

Yuqi Hu is from China. He became a Safety Engineer from the China University of Geosciences in 2012 with a BSc degree, and then obtained an MSc degree from University Of Science and Technology of China in 2015. At USTC, Yuqi studied experimentally the small particles in the smoke of cigarettes. Now at Hazelab, the preliminary title of his thesis is "Experimental Investigation of Peat Fire Emissions and Haze Phenomena" and is funded by China Scholarship Council. 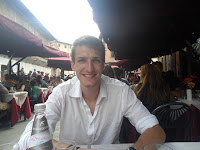 Franz Richter is from Germany. He became a Mechanical Engineering from Imperial College London in 2015 with a MEng degree. During this final year project, Franz studied computationally how the spread of non-uniform fires in a building affect the charring of timber structures. Now at Hazelab, the preliminary title of his thesis is "Computational pyrolysis of timber in fire" and is funded by EPSRC and Arup.
Posted by Guillermo Rein