O-Revealer: Landmine clearance by the controlled use of fire

For the past few years, I have been developing a new method to clear landmine. Let me tell you a bit of the story.

More than 30 years after the 1982 Falkland War, only 5,000 landmines out of the original 25,000 anti-personal and anti-tank mines placed by the Argentine forces have been demined. Under the Ottawa Treaty on Anti-Personnel Mine Ban, the British government had the legal responsibility to remove them by 2009 but due the slow pace and expensive use of demining technologies, the government has asked for a 10-year extension. Because a large fraction of the documented 117 minefields in the Falklands are in peatlands, I have proposed a novel technology specific for locating landmines buried in peat using controlled combustion. I proposed this technology, which I have named O-Revealer, in a letter to the UK Ministry of Defense in 2007. They gently replied saying they was no interest from their part. But I endured nonetheless, and slowly continue working on the topic with the help of my engineering students.

Rationale of clearance by fire

O-Revealer has potential to be applied on hundreds of minefields across the world. In a preliminary search, far from being exhaustive, by crossing minefield maps and peat maps, we have found that peat and other histosols are known to host minefields not only in the Falklands but also in Vietnam, Burma, Laos, Uganda, Zimbabwe and the former Yugoslavia to name a few.

Peat is a soil with a large fraction of organic materials (also called histosol). This makes peat flammable.  When burning, peat fires are driven by smouldering combustion (not flaming combustion, which has a minor role). Smouldering is the slow, low-temperature, flameless burning of a porous fuel. Despite the existence of a body of literature on the ignition and spread of smouldering fires in peatlands, it has never been used before for demining. Smoldering fires can ignite and spread in soils up to a maximum moisture content (MC) around 150% (in dry base), and continuously burn for days, even weeks. Therefore, once smoldering fires are initiated in a minefield, especially during a dry season, it can consume the surface soil layer and expose mines which then can easy be identified and safely removed.

O-Revealer consists on a set of techniques to thoroughly control the fire by combining external means for ignition, ventilation, compartmentation and suppression. Not all histosol or weather conditions will be apt to this technology.  Local weather conditions are taken into account and adjusted for. By mastering the process, O-Revealer becomes an inexpensive and reliable technology, easy to deploy and that excels at the most important issues of humanitarian demining including detection of non-metallic mines, avoidance of false negatives, and  high demining rates.

We envision that O-Revealer will be applied in small plots of land, one at a time by each team, and following a strategy of combining it with other demining methods.

We have conducted the very first laboratory experiments designed to study demining with fire on two different landmines, one plastic and one metalic. We selected 2 types of mines: the Italian SB-33 anti-personnel plastic landmine, and Serbian PROM-1 anti-personnel metal landmine. Their corresponding inert dummies were built with the same materials and at high-fidelity, and buried in peat with moisture contents ranging from very dry (MC of 5%) to normal conditions (MC of 130%). In all cases, the smouldering fire burn across the peat and left the dummy exposed to the open for easy identification and removal.

The spread rate of peat smoldering is on the order of 1 cm/h and the peak temperature is around 500 °C. This means that the soil, vegetation, landmines and other buried objects are exposed to a thermal pulse that sterilized the soil and may damage the mine (specially plastic ones) or even trigger a detonation of the secondary charge. So O-Revealer poses two additional issues that need addressing: the mitigation of the environmental impact on the soil ecosystem, and understanding when thermal triggering of the detonator might take place. From our experiments, we have learn that we can address these two issues at the same time by burning peat in a window of moisture content that allows for spread (MC<150 and="" but="" damage="" mine="" minimizes="" soil="" the="" to="">50%). 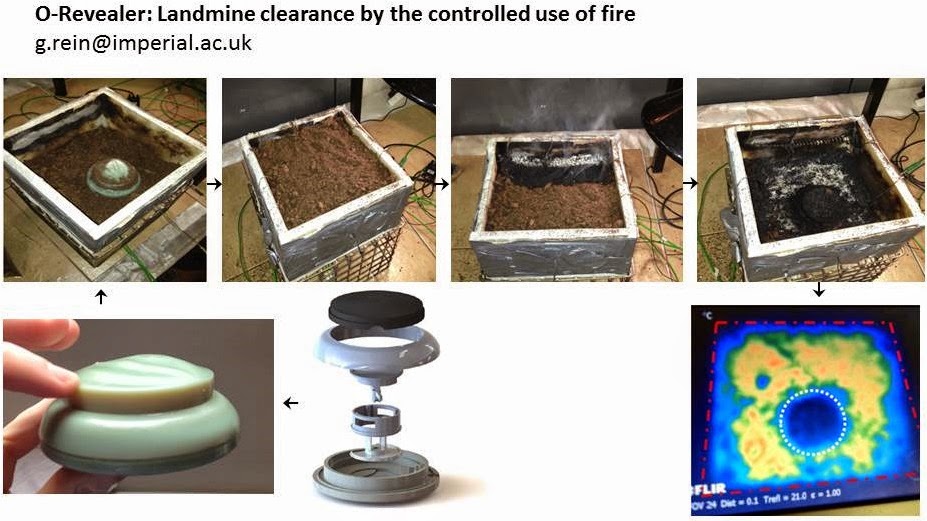