We have just published a paper in the journal Environmental Modelling & Software reporting our computational model of the combustion technology that cleans soils (EMS 2011, in press). Based on the physics of the problem, the model simulates the destruction of industrial chemicals found extensively polluting the subsurface and aquifers. 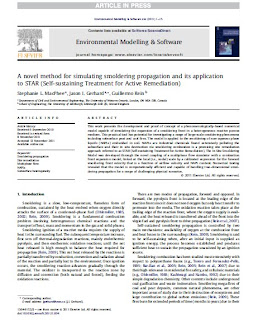 This very promising remediation technology is called STAR (Self-sustaining Treatment for Active Remediation) and was developed and patented at the University of Edinburgh. The BBC described it as "It burns away pollutants such as oil and petrochemicals from the ground, but leaves the original clean soil behind" [New clean-up technology trialled, 2010]. It consists on boring the site at a few strategic locations, and inserting at some depth a source of heat (igniter) and a source of oxidizer (air injector). The smouldering combustion front is initiated by the igniter, and the rate and location of the front is controlled by the injectors. Even compounds that are resistant to biodegradation are effectively destroyed by STAR. The latest pilot test was conducted at a former cresol manufacturing facility in New Jersey. It demonstrated the rapid rate of contaminant destruction and the high remediation efficiency (95 to 99.99%), with an measured sustained destruction rate up to 800 kg/day.

The model is two dimensional (subsurface slices, vertical and horizontal) and combines a simulator of  airflow through the soil with calculations of the propagation of the smouldering combustion front. The propagation component  is based on a fire growth simulation, the same principle used in some wildland fire models like FARSITE. The model handles well the most challenging physical scenarios of heterogeneous soil composition and multiple contaminated spots (see second figure below). The results show that air permeability, which affects the movement of the injected air, is a dominant factor for the spread rate and shape of the combustion front.


The model can now be used to optimize STAR and its deployment for specific contaminated sites. For example, to help finding the best location for injectors and igniters, or the most convenient distribution of multiple bore holes (eg, vertical, horizontal, staggered).


Moreover, because the physical principles in the model are fundamental, it can be used to study other large-scale smouldering phenomena of importance like subsurface peat and coal fires.

STAR and smouldering combustion as a remediation concept are pending patent approval (UK Application 0525193.9 and PCT Application PCT/GB2006/004591, priority date December 2005). The full reference of the paper is: