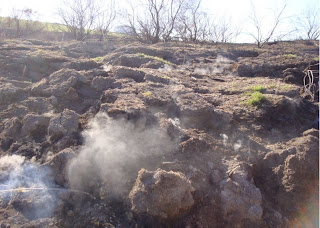 
The paper is part of the special issue of the journal Fire Technology on wildfires (I am the guest editor of the issue). It is authored by  hydrologists at the Instituto Geológico y Minero de España who have been working on the National Park of Las Tablas de Daimiel for the last decade.

The paper provides a summary of the events leading to the 2009 fire and the fire fighting activities and water flooding that took place. It reports the analysis of key soil parameters in several locations of the park at depths up to 2 m, such as organic matter, mineral carbonated fraction, bulk density and water repellency. Continuous monitoring of soil moisture and temperature were recorded in 12 points at different depths for a span of time of several months that includes before and during the fire. They also offer soil profiles and observations of cracks and hollows on the surface.

They found that a low number of peat samples exhibited water repellency. This is in contrast to what has been previously put forward as an hypothesis in the soil literature, that during and after peat fires, water repellency is important and could hinder fire fighting efforts and ecosystem recovery.

Their observations support the idea that smouldering peat fires can propagate through the subsurface pipe networks over long distances, and show that the fast development of cracks and hollows preceded in several months the detection of the fire. Their observations confirm as well that the presence of active smoke columns is a late warning signal.

The authors propose a continuous soil moisture and temperature monitoring as an early alarm system able to quantify the risk of peat fires.
Posted by Guillermo Rein