On the Haze produced by smouldering fires in Indonesia

The recent article of Banyan in The Economist, Where there's smoke, talks about the endemic haze that invades large parts of South East Asia during most dry sessions.

Banyan says "The haze has returned this year. Air-pollution indices in Singapore and the south of the Malaysian peninsula had reached their highest levels since 2006 until rainfall on October 23rd brought relief. In parts of Sumatra, the neighbouring Indonesian island spewing out the smog, it had been getting hard to breathe"

The haze is caused by large and creeping smouldering fires. Under drought conditions, peat fires are a disproportionate contributor to biomass burning and atmospheric emissions. After the study of the 1997 extreme haze event in South-East Asia, the scientific community recognised the environmental and economic threats. The haze was caused by the spread of vast smouldering peat fires in Indonesia, burning below the surface for months during the El Niño climate event. It has been calculated that the 1997 fires released between 0.81 and 2.57 Gton of carbon gases (13–40% of global emissions).

Smouldering fires are an unresolved issue of large global magnitude involving science, technology, environment and climate. I comment on each here.


Science Issues: lack of knowledge
Smouldering fires, the slow, low-temperature, flameless burning, represent the most persistent type of combustion phenomena and the longest continuously fires on Earth system (>6,000 years old fire in Australia). Although interactions between flaming fires and the Earth system have been a central focus, smouldering fires could be as important in terms of ecosystem damage, atmospheric emissions and socioeconomic threats but have received little attention. Differences with flaming fires are important.

Technology and engineering issues: they cannot be extinguished or rapidly detected
Smouldering fires propagate slowly through organic layers of the forest ground and can reach deeper horizons if large cracks, natural piping or channel systems exist. Once ignited, they are particularly difficult to extinguish despite extensive rains, weather changes or fire-fighting attempts, and can persist for long periods of time (months, years) spreading deep and over extensive areas. Moreover, these fires are difficult or impossible to detect with current remote sensing methods because the chemistry is significantly different, their thermal signature is much smaller, and the plume is much less buoyant. The technology and engineering to effectively and economically tackle these fires does not currently exist. Brute force and trial are error are the most effective tools available at the moment. This is clearly not enough for such a large global problem. 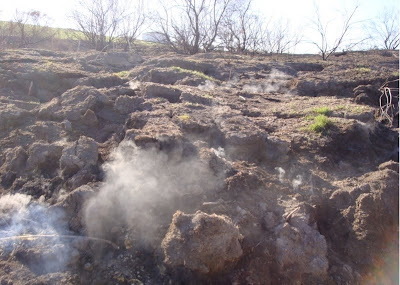 Environmental issues: highly damaging and irreversible
Smouldering affects ecosystem that are not adapted to fire. Their long duration (from weeks to decades) leads to extensive loss of mass above 90% of the organic content. For example, a layer of 5 m of peat is reduced to 30 cm. Whereas flaming fires result in superficial heating of the soil, smouldering leads to sterilization. Smouldering combustion is characteristically an incomplete oxidation reaction and thus emits in addition to CO2 and water vapour, a mixture of volatile organic species (e.g. CH4, C3H8, CH3OH), polyaromatic hydrocarbons, CO, and particulates at a higher yield than flaming fires. It favours CO to CO2 ratios around unity (as opposed to ratios around 0.1 in flaming combustion), so CO is as important as CO2 in emission from smouldering fires. Traces of other gases are emitted as well.

The photo above shows peat fire in the National Park of Las Tablas de Daimiel, Spain. Photo taken by Guillermo Rein on November 25, 2009 in the area adjacent to the National Park, near Molimocho.

Climate issues: positive feedback
These wildfires burn fossil or pre-fossil fuels and thus are the only carbon-positive natural fire phenomena. This creates feedbacks in the climate system because soil moisture deficit and self-heating are enchanted under warmer climate scenarios and lead to more frequent fires. Warmer temperatures at high latitudes are resulting in more frequent Artic fires. Unprecedented permafrost thaw is leaving large soil carbon pools exposed to smouldering fires for the fist time since millennia.

Hope some of these issues are resolved in the incoming decades. I aim at contributing to the solutions.
Posted by Guillermo Rein